Augmented Reality (AR) and Virtual Reality (VR) have been getting a lot of attention recently. Businesses like Walmart, UPS, and Boeing have made major investments in VR and AR for training and product design. If your company wants to take advantage of the many opportunities that immersive technology offers, the first challenge is deciding between an AR or VR centered approach.

In my previous blog post, I discussed many different considerations for getting started with VR but would like to take a step back and explain the different aspects of AR and VR to help you decide which makes the most sense to meet your objectives.

Immersive technology (AR/VR) is rapidly changing and the terms and acronyms surrounding it are evolving just as quickly.  As more terms appear, the lines become less clear and, sometimes, conflict with each other.  Additionally, as the technology (especially the hardware) evolves, it continues to become more similar than unique.  Therefore, for the sake of simplicity, I’m going to discuss immersive technology using the concept defined in 1994 by Milgram and Kishino of a Reality-Virtuality Continuum (see figure below).

This model allows us to separately discuss the concepts of Augmented and Virtual Reality with the understanding that they’re not completely distinct and separate. Rather, they exist somewhere between the real environment and a completely virtual environment.  Advances in headsets, called Head Mounted Devices (HMDs), are further blurring these definitions as they begin offering both AR & VR capabilities within the same device.

This is all to say that immersive technology can be somewhat ambiguous. Because of that, I’ll provide guidance and create some definitions around the different terms to help you make the best choice for your company. 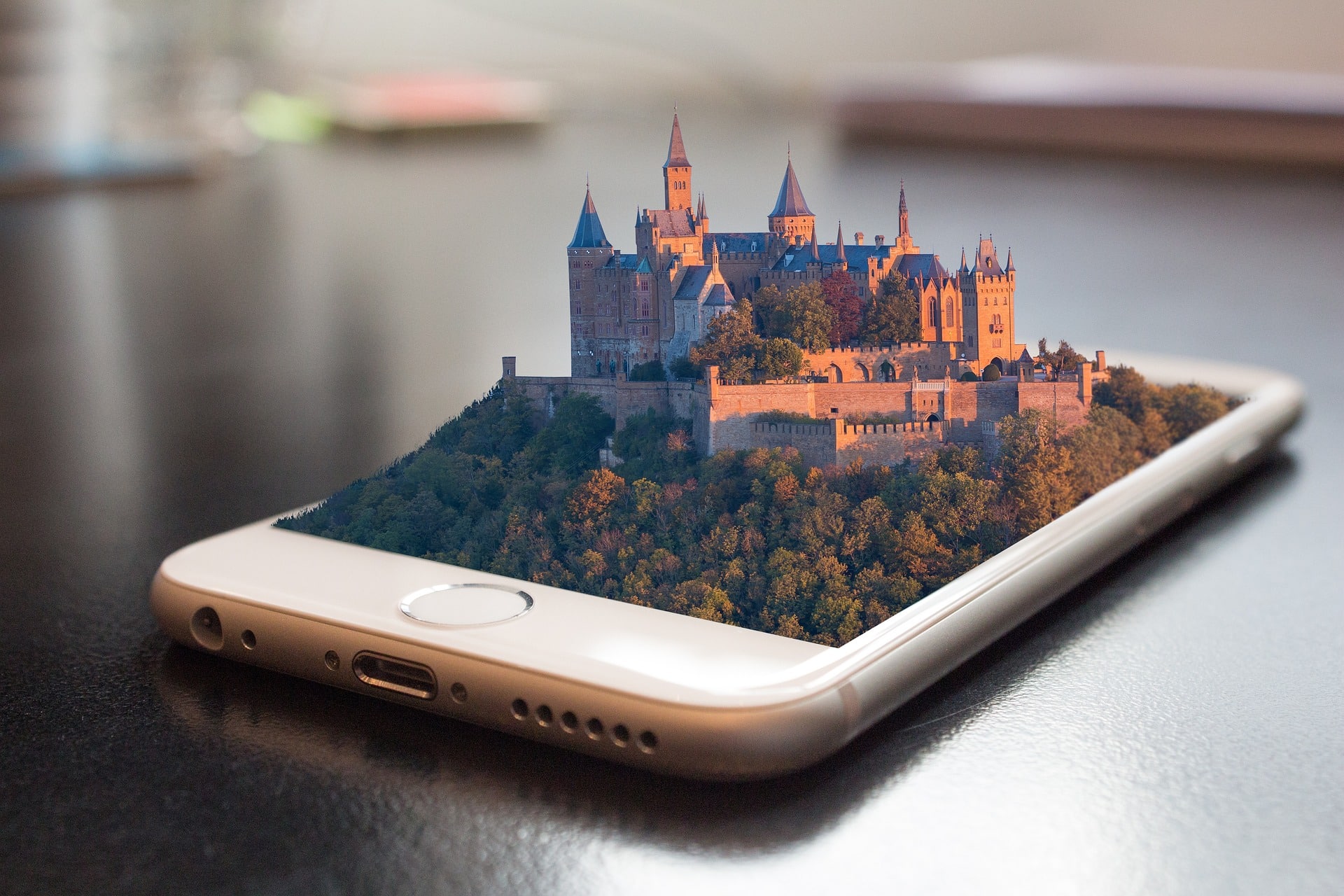 With consideration to the continuum described above, applications with 2D filters that move with an object that appears when an image is recognized would be considered as basic AR. Think of filters on Snapchat or Instagram.

Moving further to the right would include 3D objects that allow interaction and manipulation of the object. This is often defined as Mixed Reality (MR), as is the case with the Microsoft Hololens.

The biggest advantage of AR is accessibility.  Everyone has an AR viewing device within their smartphone.  Additionally, being able to see the world around you while viewing the objects provides the most natural, comfortable experience.  Finally, AR experiences can be extremely simple and still provide an impactful experience that can minimize cost and time.

The same accessibility that makes AR attractive is also one of its biggest limitations.  Viewing virtual objects on a smartphone screen can be restrictive and limit the experience if not designed properly.  Likewise, fully immersive HMD’s that allow the AR application to be overlaid in your field of view are currently very expensive and somewhat impractical for the masses. However, several large companies like Apple and Google have them in development which could make them viable in the future.

The latest Apple and Android mobile devices have enhanced capability to view AR through their ARKit and ARCore frameworks, respectively.  This includes mobile phones and tablets which allow for a larger viewing area.

“AR Glasses”, or HMDs, are also being developed at a rapid pace. They allow the participant to view the AR objects and information hands-free in their normal field of view. However, current AR HMDs offer a much more limited resolution and field of view (FOV) than VR HMDs.  Even the current leading devices from Magic Leap and Microsoft only have around a 40-degree FOV compared to 200 degrees on the new Pimax 8k VR HMD. 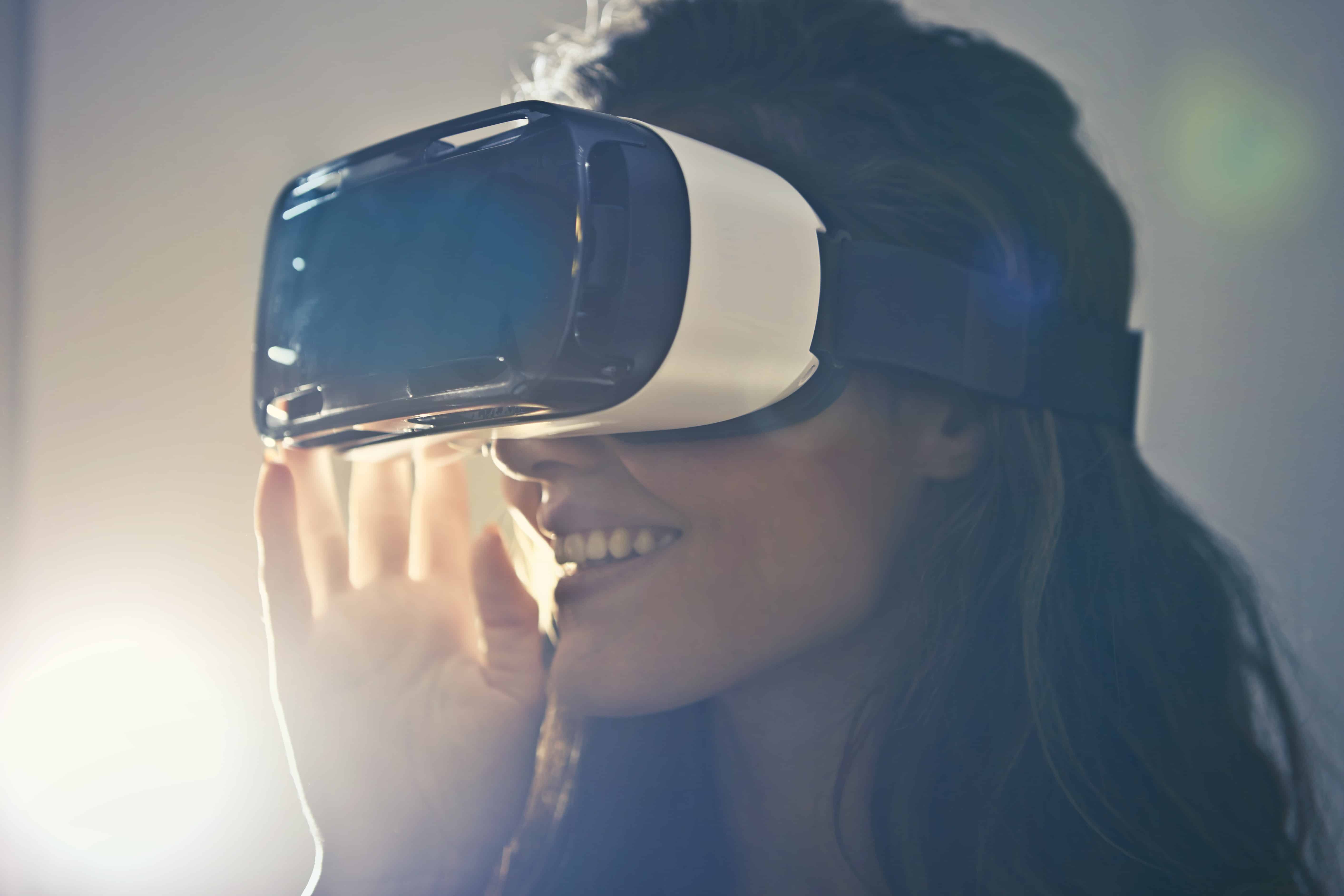 There are many options when publishing an AR app that can make distribution somewhat simpler than virtual reality.  The primary options are the following from least to most complex:

As mentioned, AR applications can be a very simple way to get started with immersive technology.  They can also be highly complex, containing data visualization (overlaying data on a recognized object), interactivity, and manipulation of real-world objects.  Additionally, unlike VR, one must consider all the elements of the real world which adds exceptional variability to a project.  For example, image recognition in different lighting can be challenging.

There are arguably three ‘levels’ of AR development which I’ll define as passive, active and interactive.  Listed below are examples of AR applications that fall into each area:

Instagram filters, text image language translators, and other apps that place (or replace) static images and information upon the real world are examples of passive AR applications.

Example: A conference attendee must find posters with a specific Logo on it. They then use the app on their phones to view hidden text associated with a scavenger hunt.

Applications that allow the user to participate in the ‘AR world’ are considered active. An example of this is the IKEA app. It allows furniture to be placed and moved around in your home to find the best layout.

Example: The conference attendee finds the posters from the previous example but must add decoration. They can access a catalog of objects then sign their name to show they were there.

The defining feature of an ‘Interactive’ AR experience is the ability to manipulate and change the objects inside of the environment, resulting in constant evolution. This is different from ‘Active’ experiences because they are limited to a fixed environment and static objects.  In contrast, Interactive AR experiences leverage data and physics and, by default, respond to the user(s) in a similar way to real objects.

Example: A 3D model of a cookie was programmed to understand all the properties of its ingredients and their responses to both temperature and humidity. In AR, the user can pick up the dough, shape it, put it into a virtual oven. It will cook exactly like a real cookie, factoring in the size, time, and temperature. It can never be changed back without resetting the environment.  This may seem simple but applying chemical characteristics to a virtual object opens the possibilities of things like materials & pharmaceutical development and research at a fraction of the cost or risk. 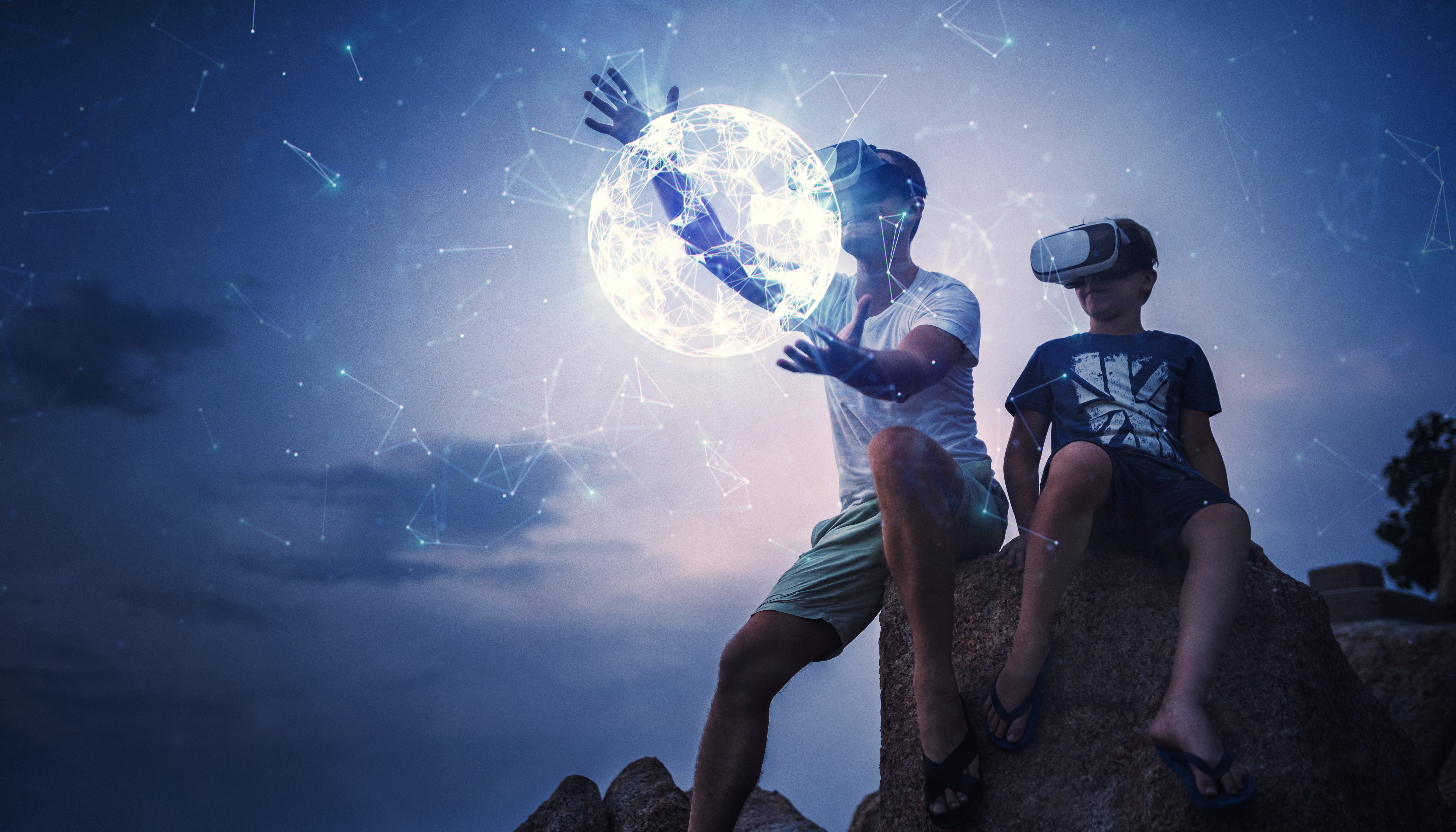 Virtual Reality (VR) is a completely digital experience that is viewed inside a closed visual environment. It may also include physical elements from the outside world such as movement, temperature, and sound.

Currently, there is a clear consensus that VR only includes experiences where there is no visual interaction with the real world. For this reason, a sense of motion and place can be leveraged far more effectively than in Augmented Reality. Virtual Reality allows the user to experience anything imaginable without regard to the real world.

The biggest advantage of VR is the ability to create any environment imaginable, with complete control over all the elements contained within.  This allows the creator to build an experience that is impossible or impractical to achieve in the real world.

Once again, the main advantage is also the primary limitation. Every element, even the most insignificant, must be created digitally to create a comfortable and effective VR Experience.  Special consideration must be given to elements like navigation and physics so that a user doesn’t become lost or ill inside the environment, which is not necessarily required in Augmented Reality.  It is also much less accessible due to the need for additional equipment.

Virtual Reality experiences are almost exclusively provided using headsets called Head Mounted Devices or HMDs.  They range from HMDs that leverage a mobile phone screen up to extremely high-resolution devices topping out at 8K resolution with 120 MHz refresh rates and 200-degree field of view.  Right now, most high-end HMDs must be connected to a powerful computer to run the graphics which significantly increases the cost and limits accessibility.  This is changing quickly, however, with Oculus leading the way in wireless, high-quality HMDs such as the Oculus Quest.  In the coming years, devices will also begin to work with both AR and VR by using front-facing cameras to “pass-through” the real world. 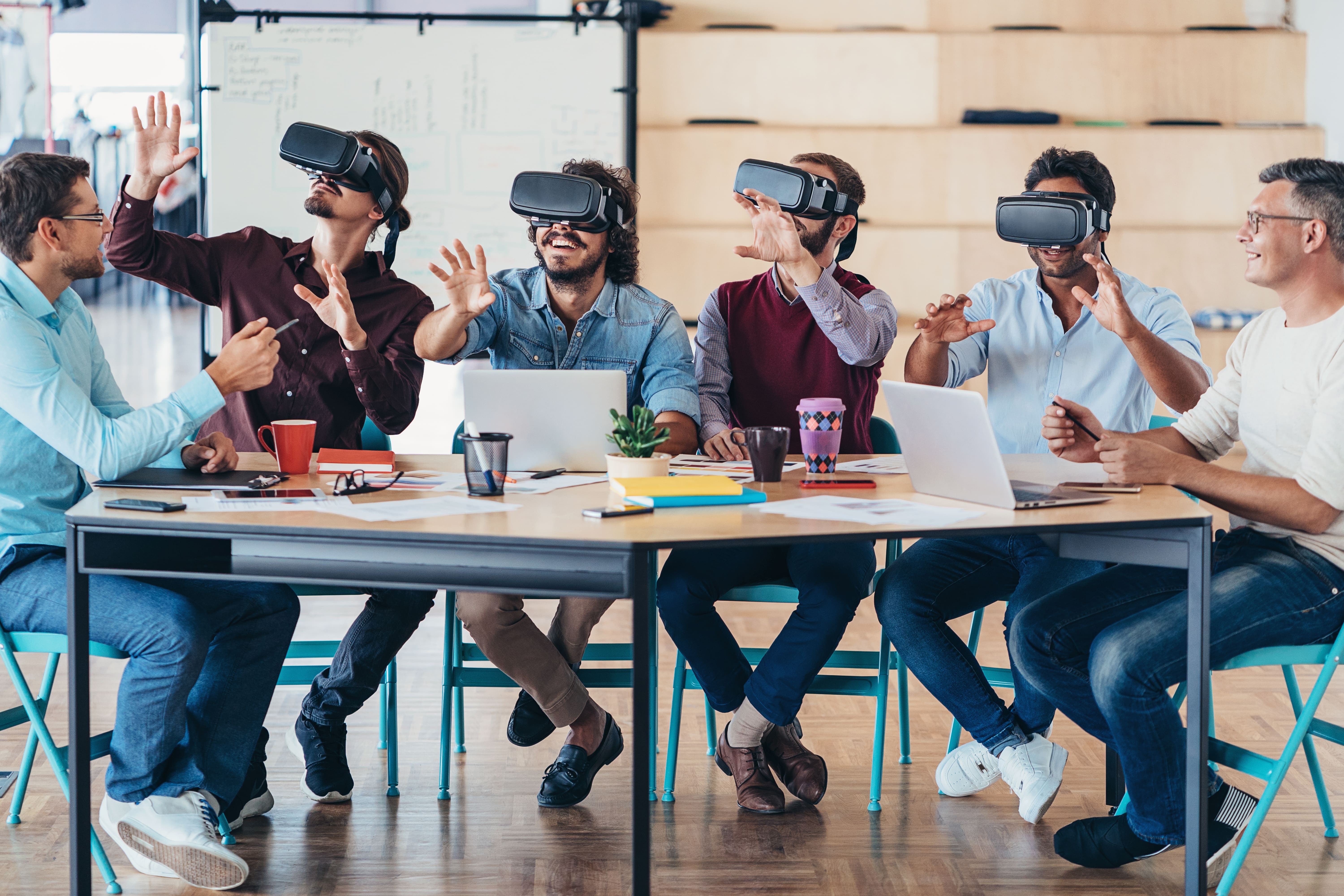 Distributing VR content is often based upon the brand of the device.  Most enterprise-focused devices leverage a common platform called SteamVR. However, there is not yet a standard for publishing and distribution. The top brands are competing to build the next “iTunes store” for VR. It is important to carefully consider your options when pursuing a VR project as the landscape is ever-evolving.

Despite the need to develop everything in a VR environment, getting started can be relatively simple and cost-effective.  There are significant resources with prebuilt environments and objects that are very reasonably priced, albeit limited in customization.  With that said, the sky is the limit when it comes to visualization.  If you can imagine it, you can do it as long as you have the budget.  The critical success factor is to utilize a developer who understands navigation, physics, and a sense of presence. The goal is to create a VR environment that is comfortable and easy to navigate for the user.

From a business perspective, VR opens up a world of possibilities.  As mentioned in my previous post, there are some key considerations when choosing the right way to leverage this powerful technology such as; costs, productivity, and practicality.  Many businesses are finding success in three main areas listed below:

From the military to manufacturing and retail, training has emerged as one of the ways VR has been leveraged the most in non-gaming environments.  The ability for VR to minimize risk, reduce cost, and improve retention are just three reasons for its effectiveness.

Companies can show their products or provide experiences to their consumers in an impactful and convenient way that was never possible in the past. Entertainment experiences in VR can drive brand awareness and recognition.

Virtual Reality gives teams the ability to collaborate in the same visual environment regardless of location or other limitations. Being able to explore, design, and develop 3D models without the restrictions of the physical world has resulted in significant cost reduction while drastically shortening the product development lifecycle.

The market for immersive technology is showing massive growth over the next 5 years.  Businesses of all sizes in all industries are exploring and investing in AR and VR to gain a competitive advantage and reduce costs.  To avoid being left behind, it is important to begin incorporating AR & VR into both short and long term plans.  Given the rapid pace of change with immersive technology, it’s critical to find a capable development partner who can help identify the best use cases for today and navigate the evolving landscape ahead.