TikTok is a massive social media platform with over 800 million users worldwide (as of May 2020) and is valued at $75 billion (as of June 2020). It also has the highest rate of social media engagement per post across all platforms (including Instagram and Facebook). Engagement is a core part of TikTok’s platform, which allows users to “Duet” and “React” to other user’s videos.

Creators have curated massive followings on TikTok, with the most popular account having over 40 million followers. However, unless these influencers get brand deals, it’s hard for them to monetize their content. PearPop wanted to give influencers the ability to monetize their “Duets” and “Reactions” in order to capitalize on their massive fan bases.

Our team of developers built the PearPop platform as a web app using PHP and Vue.JS. Users can access it via a browser on their desktop or mobile, and it is optimized for mobile devices.

To work around the lack of APIs from TikTok, we helped PearPop build out a custom workflow where all users are manually checked by the PearPop team. Every time a new user registers on PearPop (using the same username as their TikTok), they are given a verification code to add to their TikTok bio. A PearPop team member will then verify the profile. The same method of verification is used to ensure video requests are honored by the PearPro.

PearPros (aka TikTok influencers) are able to set a fixed price for “Duets”, “Stitches”, and “Sounds”. Users can also send a bid with the amount they would like to pay for either post type, and PearPros have the ability to either accept or reject the request.

PearPros are updated in real-time when they receive requests and can accept/decline requests at any time. Once a request is accepted (or rejected), the member that sent the request is updated and the PearPro has 24 hours to upload the video.

PearPro integrates with banks and credit cards via Stripe. Members are required to add their credit card information before they send any requests, and PearPros must set up their deposit information. The member’s credit card is not charged until a PearPop team member verifies that the video has been posted. Once it is verified, the card is charged and the PearPro gets access to the funds.

PearPop was built with scalability in mind. With how massive TikTok is, the platform needed to be architecture to handle a massive amount of users all sending and accepting requests at the same time. The platform is hosted on Amazon Web Services (AWS) in order to ensure flexible scaling. 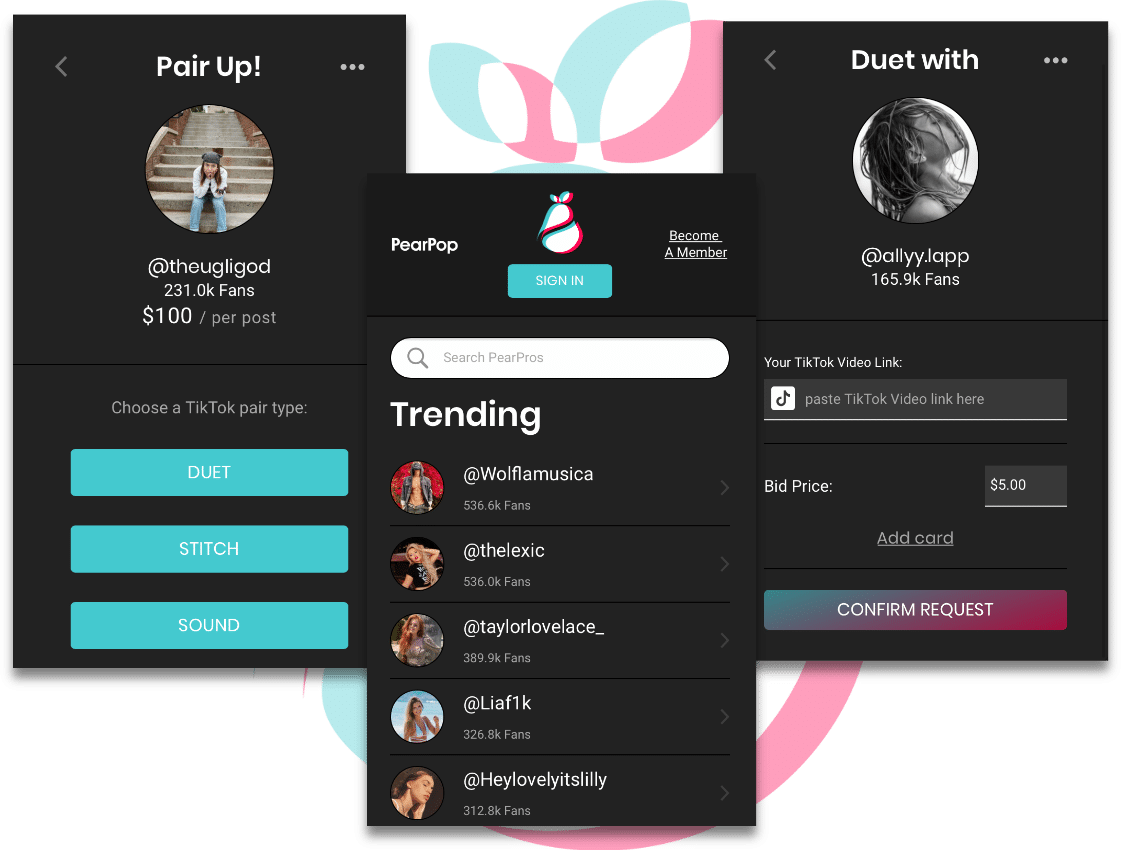